Join us for a celebration of all things NEWTON, IOWA: ARTS, FOOD, MUSIC, HISTORY, RED PRIDE & SO MUCH MORE

Newton Fest is excited to announce Trinity Structural Towers has donated $5,000 to this year’s Newton Fest and will be a title sponsor for the community event scheduled for June 8 – 11.

Trinity Structural Towers was the title sponsor for the second annual Newton Fest in 2016 and helped to expand the event through the company’s financial support.

"Trinity Structural Towers is once again helping ensure that Newton Fest will be a successful community event and we couldn't be more excited about it," said Jessica Lowe, chair of the Newton Fest committee. “Trinity's support of Newton Fest for the past two years has allowed the event committee to focus on growing the festival and adding great new attractions."

Headquartered in Dallas, Texas, Trinity Structural Towers operates some of the largest production capacity facilities for the fabrication of tubular wind towers in North America. With over 200 employees, they are a key employer and partner in the community.
​
"We are so thankful to have business like Trinity Structural Towers and TPI Composites who see the value and importance of being a community partner,” said Lowe. “I think this year's Newton Fest will be the best year yet thanks to our sponsors." 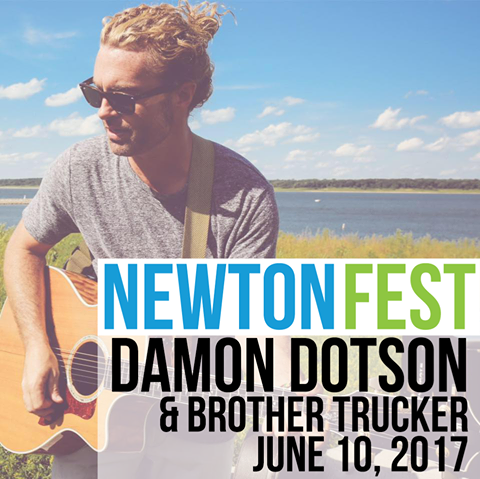 ​In addition to the two evening performances, local talent take the stage beginning at noon on Saturday, June 10. This is following performances Friday night including metal giants Metallica with Avenged Sevenfold and Volbeat at Iowa Speedway and Aftershock performing at Thunder Nites.

Damon Dotson is a singer/songwriter originally from Northwest Iowa but now based out of Des Moines, Iowa. Dotson has released four original albums and played countless shows throughout the Midwest. His 2016 album, “Tumblin’” had a sold out album release show and climbed to #24 on the iTunes rock charts. He is no stranger to the area, consistently playing shows in the Newton area for the last several years. He’s one of two Iowan’s who have sang “America the Beautiful” on the floor of the House of Representatives at the Iowa State Capitol; the other being world renowned opera singer Simon Estes.

Brother Trucker, an Americana roots rock band based out of Des Moines, has toured the Midwest since 2000, playing festivals, bars, coffee houses, parties, and a myriad of benefits. With four albums to their credit, the band is influenced by the sounds of the Rolling Stones, Neil Young, and Drive by Truckers. The band consists of Andy Fleming (Lead Vocals/Guitar), Mike Fitzpatrick (Lead Guitar/Vocals), Lyle Kevin Hogue (Bass), Jim Viner (Drums) and Matt Jesson (Keys/Vocals).

Newton Fest also will feature local talent on the concert stage from noon to 5 p.m. Saturday before the main shows in the evening. Local bands, musicians and performers who would like to showcase their talents for 30 – 45 minutes, can apply for a chance to be part of Newton Fest by visiting http://www.newtonfest.org/participate.html.

Newton Fest is excited to announce TPI Composites has donated $5,000 to this year’s Newton Fest and will be a title sponsor for the community event scheduled for June 8 – 11.
​
“TPI is very excited to play a role in the 2017 Newton Fest. As Newton continues to grow and support the local business community, TPI will continue to look at new ways to partner with the community and to provide support and dedication for our associates,” said Doug Spoon, General Manager of TPI Composites. “With the addition of the carnival to this year’s Newton Fest, TPI felt this was a great way to show our associates and families how much we appreciate them!”

"We are thrilled about this commitment from TPI Composites," said Nathan Unsworth, co-chair of Newton Fest. "These types of partnerships, between community organizations and private businesses and corporations, are vital to advancing the goals of our community. The fact that TPI is the largest employer in our community and they are supporting one of the newest community events means that great things will continue to happen in Newton.”

Headquartered in Scottsdale, Arizona, TPI Composites is the largest U.S.-based independent manufacture of composite wind blades. Their facility in Newton, Iowa is the largest employer in the community employing about 950 workers.

Newton Fest Continues to Grow; 2017 event will include carnival & Much more 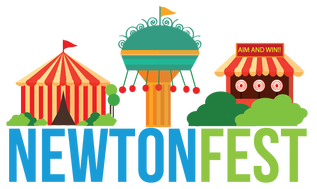 Newton Fest is going to be bigger and better in 2017 with the addition of Joe’s Old Fashion Carnival. The carnival will open on Thursday night and be open on Friday and Saturday as well. Exact times will be announced as Newton Fest gets closer.

"We are very excited about the addition of the carnival to Newton Fest," said Jessica Lowe, co-chair of Newton Fest. "The committee has discussed a carnival since the inception of the event and it is finally happening. The carnival is going to be something new and fun for children, teens and adults to enjoy. It has been many years since there has been a carnival in Newton and the Newton Fest committee is excited."

Joe’s Old Fashion Carnival, owned by Joe Henscheid of Des Moines, will be located on the DMACC Newton Campus and features carnival rides that are from 2015 and newer. Discounted tickets will be available prior to the carnival opening.

"Thanks to the hospitality of DMACC Newton Campus, the carnival will be located on the school's green space. This will be a great location for people to enjoy the rides and games, and still have plenty of room for the many other events planned around downtown Newton during the four-day celebration."
​
Newton Fest starts on Thursday, June 8 and goes through Sunday, June 11. The schedule of events is still being finalized but some of your favorites, including Bill Riley Talent Search at Maytag Bowl, Newton Main Street’s Backyard BBQ competition, Greater Newton Area Chamber of Commerce’s Classic Cars Around the Courthouse and live music on Saturday night, will be back. The Iowa Speedway is also bringing the Hot Rod Power Tour to Newton on Sunday, June 11.

Newton Fest 2016 t-shirts are still available in limited youth and adult sizes. Shirts are $10 for youth sizes and $15 for adult sizes. Proceeds will be used to help fund Newton Fest 2017. If you are interested in one of these shirts please contact us through our link on the web site.